Nearly four and a half years ago I was camped, in my van, in the backyard of my brother and sister in laws place in Port Vincent, South Australia. I had recently returned from another around Australia trip. It was a disaster right from the word go. All because of alcohol, which I would never have admitted then. It was my wake up call. Die or get better. That trip is covered on THE “PRE-RECOVERY” TRIP page. Both my brother, Andy, and sister-in-law, Megan are heavy drinkers but they were very worried about the amount of booze I was drinking at that stage. I was going through 1 to 2 bottles of vodka and 1/2 cask of wine a day. I was eating bugger all, I looked bad to say the least. unbeknown to me, Andy and Megan had been talking to each other and were really worried about my health. They didn’t think I would live much longer. Megan had organised a  counsellor from Drug and Alcohol services to “pop” in one day without me knowing it. It must have been perfect timing or more to the point, my guardian angel knew exactly what she was doing and when to do it. ( I firmly believe in a higher power, or something, that runs this whole show. We don’t do it alone and I refer to my higher power as my guardian angel. I am not religious but I am spiritual.) I distinctly remember, leaning on the veranda post, when the councillor asked me if I wanted to stop drinking, I replied “yes”, she then asked me why, I then looked at Megan and could see the pain in her face, I replied ” because I’m hurting the ones I love”. It was at that point, without knowing it, that I had surrendered. I was in the process of “handing it over”. I knew I could not do it any longer and I needed help. It was a roller coaster ride from then on. All of a sudden I realised everything that happened on my last trip was guiding, pushing, me to this point. My guardian angel was trying to help me but I just was not ready to listen. I try to listen now! 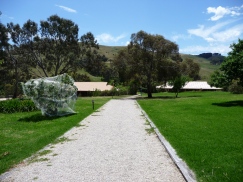 On that day I , with the help of the counsellor, selected the rehab I was going to go to, The Woolshed in the Adelaide hills, and the ball started rolling. I had to pass the entry conditions to get into the rehab, which I did with flying colours! I had to ring The Woolshed rehab every week as there was a long list of people trying to get in. It also proved to them that you were keen. It took a couple of months to get to the top of the list. Three days prior to being admitted, I had to go to detox to come down from the alcohol safely. I was still drinking up to the night before admission. Once I got there they gave me a breath test as you were not allowed to be drunk when you were admitted. I was over even though I hadn’t drunk for about 12 hours. They saw how bad I was and decided to let me stay but kept me away from the other patients until my alcohol level dropped. It took another day. After doing some blood tests they made the decision to keep me there for nearly a week rather than the 3 days as I just wasn’t healthy enough to go to the rehab. I remember being called into the office after the results of my first blood test came through. They couldn’t believe I was still standing. The particular blood count for your liver is supposed to be between 30 and 60, mine was 2900, yes, two thousand nine hundred. My liver is good now.

The rehab with the 3 huts in the foreground

My first day in rehab was daunting to say the least. I had no idea what to expect. I had this image that there would be a heap of people wandering aimlessly around the property, some in straight jackets, and maybe drooling from the mouth, It wasn’t anything like that, there were no straight jackets!!!! I had to catch a bus from the city to the country town near the rehab and get picked up from there by one of the counsellors. I had never travelled on a bus in my adult life so it was extremely uncomfortable, especially as a sober alcoholic. There was no booze to hide behind. I was travelling with another “inmate” who only lasted one day at the rehab before he left. In my 7 months at the rehab most people only lasted a couple of days to a couple of weeks before they would leave. It wasn’t easy. One of the hardest parts was the fact that you couldn’t smoke there either because it was a government property. You had to give up everything. They did give us nicotine puffers and patches. Smoking is still one of the hardest things to avoid out here in the normal world. If it wasn’t for the fact that I am so much healthier for not smoking, I’d take it up again, as most that get out of rehab do. The first job I had to do was help make a birthday card for one of the other rehabbers first six months clean birthday. It was very important to celebrate certain milestones in our recovery. We celebrated 30 days, 90 days, 6 months and then every year after that. The yearly birthdays are also celebrated in AA. We hand-made all of the cards by cutting out bits of magazines and pasting them onto card. I remember thinking it was good training for extortion letters! My hands were shaking so much I was struggling to cut anything at all. The housing there consisted of 3 wood log “huts” with 4 bedrooms in each. There were two beds to a room with wardrobes separating each bed. I like my own space and sharing with a stranger was horrifying to say the least. There was a big kitchen, large lounge and dinning room. There was only one bathroom. The whole facility relied only on rainwater so you were limited to 4 minute showers max. There were timers in the shower. One hut was for males, the one I was in, one for females and the other was mixed.

The time was spent as follows. There was a meeting first thing in the morning in the huge common  room. We the split up into our work groups. There was maintenance. admin and garden crews. I was in Admin for quite a lot of the time I was there. We had regular group as well as one on one counselling sessions. There was a big meeting on Thursdays call “The Huddle” where you would talk about how you were going and the others would comment on what they thought. Lunch was cooked in the common room by selected rehabbers and dinner was cooked in the hut for all of the residents in that hut. There were very strict rules on what type of groceries we ordered and what we cooked. Phone calls could only be made in the evening which had to be booked earlier. There were heaps of other rules and things that had to be done to help with your recovery including a weekly visit from an Alcoholics Anonymous group as well as a weekly trip to town to a Narcotics Anonymous meeting.

I don’t know what kept me going, I don’t know what gave me the strength to continue, but I did. There was a deep desire to get, and stay, sober. Maybe it was because I’d basically never been sober for any length of time before and it was a challenge. I knew that the booze had won the war and now had me. I never liked being controlled by anyone or anything. It had total control. It was like I was on auto pilot, I was being guided to a sober life. Getting sober wasn’t the real scary part, living sober was almost unimaginable. How does anyone go through a day without a drink? How do you do anything without a drink? I have discovered that doing most things sober is achievable and usually works out better and easier. Mind you, some things remain a major challenge, even after 4 years of sobriety, I still can’t dance sober…. I’ve got to get over that hurdle!!

While I was in the rehab they had “suggested” things to do to get and stay sober. I treated these as “rules”. While I was in there, I met many people who had attempted to get clean and sober more than once, a lot, many times. I was determined to get it right first time. There was no way I was going through all that again. There was one counsellor in there that was a recovering alcoholic with 16 years of sobriety up and got it first time. He was my hero! I’m not saying that after a couple of years or so, you’re “cured”. There is always a chance of relapse and its a constant job of being aware that relapse could happen at any time and to avoid it.  What I am saying is I’m determined not to go back there. One of the things they wanted us to learn was what to do, when, and if you relapsed. I refused to do this. My theory for not doing it was because I didn’t want to give my head any “escape clause”. I figured that if I knew that I could recover again, it would be ok to relapse. I have it firmly implanted in my head that if I relapse I WILL die. Another thing I did was make up a mantra to repeat over and over while I was there. I figured that if I repeated in my head that “I don’t drink” my brain would have nothing to compare it to or no reason why I shouldn’t drink. It had no guts. So I made up the mantra ” I don’t jump off tall buildings, I don’t jump out of planes and I don’t drink” My theory behind this is that my brain knows that the first two will kill me so it should associate drinking with killing me as well. That’s my theory and I’m sticking with it!!!! So far so good😊

After about 7 months at The Woolshed I graduated to their “halfway” program. This is where you moved into a house in the real world, with other graduates, if there were any, and broken into real life. As I’ve said before, It’s not the quitting drinking that’s the hard part, it’s the LIVING sober that’s hard. We had a counsellor visit once a week, we had to go back to the rehab once a week and we had to find volunteer work to keep us busy. I applied for, and started my T.A.F.E. course, a diploma in Animal Technology, while I was there. I also started doing a regular AA meeting. This meeting was at 7.00 am every Saturday and I still attend it to this day. I find AA essential to maintaining my recovery. It is a constant reminder of where I could be if I relapse, especially when a new comer joins the meeting. AA is great, and works, as it’s a group of like-minded people with a common goal, to stay sober. No one understands how an alcoholic or addict, feels or thinks, better than a fellow alcoholic/addict. While I was in halfway, I put my name down for another program which was basically low-cost housing with counselling sessions every week. This program was nowhere near as intense as the Woolshed program but it was cheap housing. You couldn’t stay in the halfway program for ever. About 6 months was the limit.  The idea was to end up in long-term, low-cost housing.

3 thoughts on “The Recovery”